skip to main | skip to sidebar

Apple's new device needs a few additions before it makes the grade. An impresive iPad would have to have a full browser with add-ons and plugins and the approrpiate components of a modern browser. It would have some way to voip, which is now working on the iPhone, and should have a camera of some kind (especially a webcam). I would love to see an ATSC/M tuner and if it could support Google Docs and Google Gears, than this would be big. It almosts seems like this could be Apple throwing their hat into the netbook ring in an unconvetional, albeit insufficient way. Software is what will make the iPad succeed. 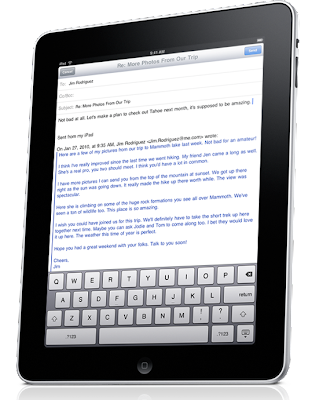 What it has:
More Specs

Apple's anticipated tablet has revealed itself as far cry from a full featured tablet computer. The unveiled device is essentially a larger screen iPod Touch with a great display screen, multi-touch and loads of possibilities. It is Apples use of the iPhone OS v3.2 on the iPad that allows it to support iPhone and iPod Touch apps. This is a smart, safe environment to release a new device like the iPad. Developers will be able to go nuts with this sort of interface. The possibilities seem quite endless at this point and it won't be long until we see loads other pad-apps.

Unfortunately, video seems limited to what is on iTunes and YouTube. This device would be the perfect way to enjoy broadcast television. If Apple included ATSC/M, the mobile broadcast digital television standard, the iPad would really make me interested. Having developers make software to enhance an advertising experience would be interesting to see. The Dell Mini features a model that supports digital television. The biggest drawback for television is that Hulu users will be out of luck, flash does not come to this apparently lackluster browser.

This device itself is hard to catigorize.The platform will be defined by it's large sensitive, accurate touch screen. Once the software is there for artists and musicians this thing could be a very powerful creative tool. Having such a large, responsive display could replace drawing tablets, especially since the device is marketed as sizesome pseudo-mobile peripheral.

The lack of multi-tasking and the lack of camera is a big disappointment for sure. Without multi-tasking this will remain the a sub rate netbook tablet or glorified portable media player. Processing one task at a time does give it full-throttle use of its 1GHz processor for an individual app. 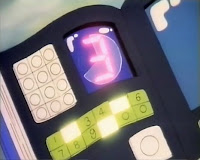 Windows 7 doesn't sound like it will be possible since the processor is not an Intel. Apple's A4 seems like a chip intended for something less than a netbook since it appears to be a custom ARM A9 similar to the Nexus One or Zune HD. This processor is fine since there isn't any usb ports or card reader or any useful connection that would have this contend with a full featured computer. From looking at what the iPad offers it doesn't impress me like Micorosoft's rumored twin screen tablet notebook, "Courier", which reminds me of Inspector Gadget's niece, Penny's computer book.

One final note is the names of iPad and iBook app. "Pad" was better than iTablet or iSlate, but I'm not thrilled. The jokes are getting old already. The app titled "iBook" is a little stale and I would have thought Apple would have an edgier way to refer to an ebook reader app. Like the way "pod" was used to describe an MP3 player.
Posted by Nate at 10:11 PM